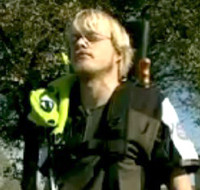 Conventions bring with them plenty of detailed costumes, a great deal of which involves cosplayers armed to the teeth with fake weaponry. That's all well and good, but just remember that getting decked out like a Resident Evil character loaded with enough armaments to take down a hundred Lickers could cause a stir similar to what happened in Omaha, Nebraska during Anime NebrasKon.

The con ran this past weekend, and one attendee's Resident Evil getup had cops confusing him for a mass shooter, a fear that was heightened when someone reported the man entering a bank.

The cosplayer in question was Jonathan Menough, who had a 9mm gun strapped to his hip while making a run from the convention to a nearby bank. Naturally, cops approached using high-risk tactics, guns drawn on Menough. They let him go when they found out he was in costume for NebrasKon.

You can see the video report at the KETV7 page.

As for the costume, Menough said, "It comes from the Resident Evil series… You can actually meet a lot of people out here that have similar interests."

Have you or anyone you know had any run-ins with the law because of cosplay?