Online Wii RPG sold 568,000 copies in Japan as of October 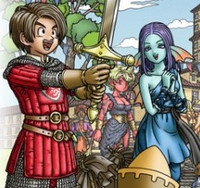 Subscription numbers continue to rise steadily for Square Enix's Nintendo Wii version of Dragon Quest X, which has sold 568,000 copies as of October. Now, as reported during Square's financial results briefing, it looks like more than 400,000 of those players are paying the ¥1,000 ($13) monthly fee to play online.

Dragon Quest X had 300,000 paid subscribers back in September, and it took Final Fantasy XI much longer—around 18 months—to reach the 400,000 subscriber milestone.

Having debuted on Wii in August, Dragon Quest X's next stop is Nintendo's new console, Wii U, in spring 2013.