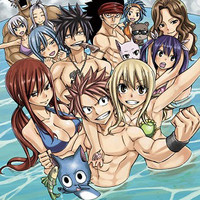 Set to be released in Japan November 16th, the limited edition of  35 volume of Hiro Mashima's Fairy Tail manga will be packaged with a special OVA episode featuring the wizards of the titular guide taking a break from Grand Magic Games training by hitting the beach.

Shinji Ishihira directs the A-1 Picture production on this fourth OVA episode.