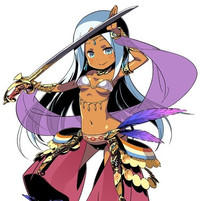 Atlus is going all out for its release of Etrian Odyssey IV: Legends of the Titan in North America. Previously slapped with an "early 2013" date, the dungeon-exploring RPG is now set for February 26, 2013, and will come packing some nice bonus items.

Pre-order or pick up Etrian Odyssey IV at launch and you'll get a music CD and limited edition art book with exclusive new content. Illustrator Alexandra Douglass will be contributing a brand new piece of art inspired by the game's world and characters just for the North American release. You can check out a sample of the art book here.

The CD, "Roughs Drafts & Outtakes," includes early arrangements from game composer Yuzo Koshiro (Streets of Rage, Actraiser), as well as tracks that didn't make it to the soundtrack's final selection.