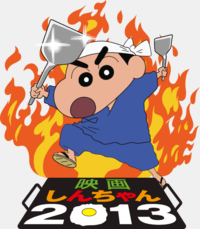 The long running, and in some cases widely praised (The Adult Empire Strikes Back chief among the lauded ones), Crayon Shin-chan movie series continues on 4/20/2013 with its 21st entry, Crayon Shin-chan: Stupid Horse!: B-class Gourmet Survival. Masakazu Hashimoto, director on Tari Tari, Professor Layton and the Eternal Diva and the 19th Shin-chan movie, returns to helm this one.

FUNimation has released highly localized selection of the TV series about a preciously vulgar kindergarten boy, while the manga has passed between Comics One, CMX and new One Peace.