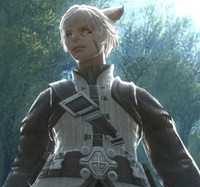 Enough idle exploration, the latest Final Fantasy XIV: A Realm Reborn clip jumps straight into questing and combat in the city-state of Gridania. See the Duty List—which allows players to complete a quest from start to finish without needing to refer to the journal—and the improved combat below.

This is the fifth installment of the Alpha First Look video series. A Square Enix community rep adds some extra notes to it in the video's forum thread:

* The battles in this video involve low level enemies. Targeting and actions are demonstrated with the mouse instead of keyboard for greater clarity.

* The battle system is currently undergoing significant revision, including changes to all damage algorithms and the claim system.