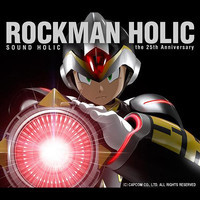 In honor of the 25th anniversary of Mega Man, or Rockman as he's known in Japan, a Sound Holic album will present the music of the game series rearranged in Jazz, Rock and Dance styles. Ahead of the Rockman Holic's December 19th release, music label Flying Dog has posted an special version of "Reloaded" with Kiss x sis OVA's Nana Takahashi singing.