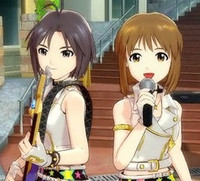 While it's not certain whether or not this means Namco Bandai has plans to bring Shiny Festa over, it does offer a glimmer of hope for fans looking to dig into a localized version. The three flavors of Shiny Festa released in Japan were Honey Sound, Funky Note, and Groovy Tune, each of which contained new anime episodes. If you missed it, you can see some of the episodes in action in our August promo video post.