D3 Publisher tries their hand at the anime license 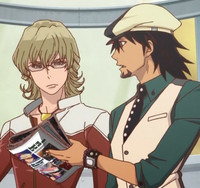 According to Japanese gaming mag Famitsu, the heroes of Tiger & Bunny aren't done with adventures on PSP. Well, it's actually unclear what type of game they'll be leaping into next, but D3 Publisher is taking the license for a spin with the upcoming Tiger & Bunny: Heroes Day.

The televised heroics made their PSP debut back in September with the Namco Bandai-published Tiger & Bunny: On-Air Jack! For now, all that's known about Heroes Day is that it's in development. Expect more on this as concrete information becomes available.