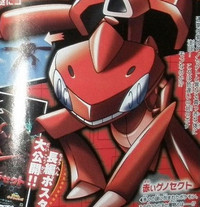 As usual, there's another Pokémon feature planned for next summer, and this one focuses on a special red version of Genesect with a flight mode. Titled Extremespeed Genesect, the film is scheduled to open in Japanese theaters on July 13, 2013 along with a new short, Pikachu and Eevee Friends.

According to the original report in CoroCoro magazine, The Pokémon Company will also be doing a Genesect Wi-Fi giveaway at Pokémon Centers in Japan from January 11 - February 10. You may recall that Nintendo also promoted a Genesect download event in North America following the release of Pokémon Black & White 2.