Date the girl to save the world 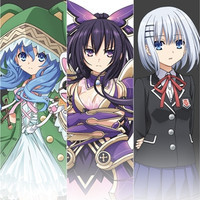 Koushi Tachibana's Date a Live light novel series is kind of like a standard magical girlfriend story, except the hero must date his ultra-powerful significant other because its what's stopping her from destroying humanity. Jormungand's Keitaro Motonaga directs the January anime adaptation with Queen's Blade's Hideki Shirane writing.

Anri Katsu (Certain Magical Index's Motoharu Tsuchimikado) and Takehito Koyasu (Bobobo-bo Bo-bobo, Gintama's  Takasugi Shinsuke) have been added to a cast which was previously revealed to include: