PlayStation 3 and Vita crowd brawler due in 2013 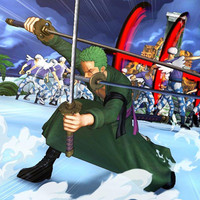 The Straw Hat Pirates faces off against 100,000 enemies in the first promo for One Piece: Pirate Warriors 2. The upcoming crowd brawler is scheduled to be released on PlayStation 3 and Vita in Japan, while Namco Bandai Europe has confirmed that at least the PS3 version will be going international in 2013.

Tags
one piece, one piece pirate warriors
« Previous Post
VIDEO: First "Suisei no Galgantia" Sci-Fi Anime Preview
Next Post »
Give Blood at Comiket and Get a "Magical Girl Lyrical Nanoha the Movie 2nd A's" or Eroge Poster
Other Top News
6 Comments
Sort by: