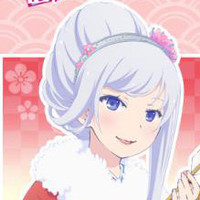 Having completed its roster of character spots, the promos for the January anime adaptation of Ore no Kanojo to Osananajimi ga Shuraba Sugiru, AKA Caught in the Carnage Between My Girlfriend and My Childhood Friend, AKA OreShura have circled back around to a second full sized trailer.

Usagi Drop's Kanta Kamei returns to the director's chair for the A-1 Pictures (Sword Art Online, Magi, From the New World) January series.