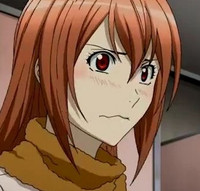 Those looking forward to the second half of the Blast of Tempest anime can get a sneak peek thanks to a new video posted to the official website. The continuation will feature an opening theme by Kylee called "Daisuki na no ni" ("Even Though I Love You") and an ending theme by Tomohisa Sakō called "Boku-tachi no Uta" ("Our Song"). Dig a part one recap and a part two preview below.

In case you missed yesterday's post, Blast of Tempest would also like to wish you all a happy new year! The second part of Studio Bones' series kicks off on January 10.