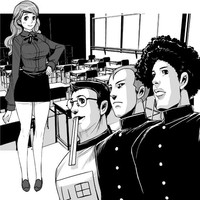 At a minute long, the preview for Ishida & Asakura is almost as long an episode of the short adaptation of school gag comedy Ishida & Asakura. The anime starts January 6th with Shuta Morishima and Nobuhisa Nakamoto as the titular leads. Pippuya directs the Hotline production written by Kenichi Yamashita, with character design from PEN.