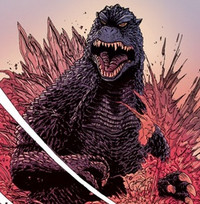 The latest info on Legendary Pictures' big Hollywood Godzilla film looks to have finally nailed a March start date for production, but that's only the tip of the beast's scales. According to a report on Deadline, Frank Darabont (The Walking Dead, The Mist, The Shawshank Redemption) has been hired to provide a final rewrite on Max Borenstein's script.

While Godzilla may be geared up for his latest crack at stomping screens through a western lens, and the addition of Darabont is great news, some issues have arisen concerning producers Dan Lin and Roy Lee. Lin and Lee are now in dispute with Legendary, who wants to drop the producers from the project. So far the studio has issued a "no comment" on the battle, which which Deadline believes has to do with fees.

Both Lin and Lee are some heavy-hitting producers, so hopefully this can end amicably and won't spell disaster for Godzilla. The film is currently targeting a May 16, 2014 premiere.

* Headline image is from James Stokoe's excellent Godzilla: Half-Century War comic, currently in the middle of its IDW run. Read it!