Haruki and Kanako Itou provide themes for anime's second half 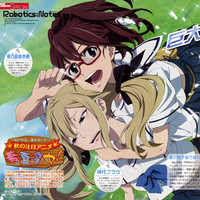 After a break for the holidays, Production I.G's anime adaptation of "Augmented Science Adventure" game Robotics;Notes will be returning to the Noitamina programming block on January 10th with new opening theme "Houkyou no Messiah" from Haruki and Kanako Itou's "Topology" as its second ending. Following their Comiket 83 promo, a second has been posted online.

SciADV Producer Tatsuya Matsubara Talks With Us About ROBOTICS;NOTES DaSH and Anime Adaptions