Cartoon Network Programming to be Offered on Netflix Streaming 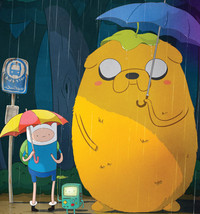 Netflix has announced that the media distributor has inked a deal with Time Warner that will allow them to stream past seasons of Cartoon Network‘s Adventure Time, Ben 10, Regular Show and Green Lantern as well as the Adult Swim block's Robot Chicken, Aqua Teen Hunger Force, The Boondocks and Children's Hospital. Content will be rolled out starting March 30th.

“We are delighted that Netflix will become the exclusive over-the-top streaming subscription destination for past seasons of favorite Cartoon Network and Adult Swim titles,” said Ted Sarandos, Chief Content Officer of Netflix. “We’re also thrilled to be able to offer the latest seasons of Dallas, one of the greatest all-time guilty pleasures.”