Series starts its release digitally and on DVD in late 2013 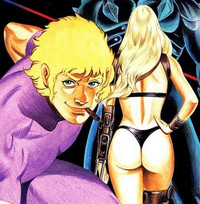 Right Stuf announced its latest acquisition today, and it's another title fans of older anime should be more than happy to own. The producer and distributor will start releasing the Space Adventure Cobra TV anime, both digitally and as two DVD sets, in late 2013.

Nozomi Entertainment will also be holding a Q&A session with Cobra creator Buichi Terasawa on February 15, and fans can submit questions via the show's official website.

One of Japan’s most influential sci-fi/action series, Cobra tells the story of a far-off future where one man – (literally) armed with a psycho-gun – and his android companion are all that stand between the human race and a  ruthless criminal organization of space pirates.

Space Adventure Cobra originally aired from 1982-1983. The 31-episode series features direction from the likes of the inimitable Osamu Dezaki (The Rose of Versailles, Golgo 13: The Professional), and Terasawa's manga also inspired a feature film, two OVA series, a 2010 anime, and the creator's own manga sequels.