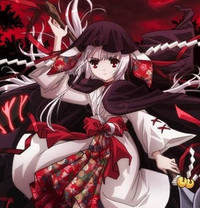 Sentai Filmworks' second acquisition announcement of the day is Okamikakushi ~ Masque of the Wolf, based on the Konami game by Ryukishi07 (Higurashi: When They Cry). The 12-episode series is due out via select digital outlets and on subtitled DVD later this year.

From the moment Hiroshi and his family arrive in Jōga, he senses something odd about the isolated village.  It’s not that the people are cold and aloof.  Except for his beautiful class president, Nemuru, most welcome him quite warmly.  But some also simply disappear.  Students transfer out of his school without any notice, and Hiroshi’s next door neighbor Isuzu, who seems quite infatuated with him, warns him to stay away from the old part of town.  The upcoming Haasaku Festival, which celebrates the town’s unique oranges, seems to be generating an unusual level of concern, and groups of masked people roam the streets by night, hunting… something.  Could the legends of man-sized wolves roaming the mountains surrounding Jōga be real?  Who is the girl with the scythe?  What is the real purpose of the festival?  And how does this all revolve around something called a Temptation?  Hiroshi and his new circle of friends have little time to solve these riddles before the answers will become far more dangerous and personal than he could ever imagine!  Beneath the mask of society and the skin of humanity, something ancient awaits in Okamikakushi - MASQUE OF THE WOLF!