"Scott Pilgrim vs. The World: The Game" Online DLC Gets New Date

Online multiplayer is now gunning for February 6 on XBLA 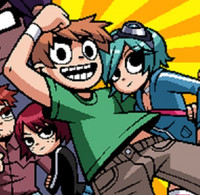 Remember last August when Scott Pilgrim vs. The World: The Game was gearing up to add online multiplayer, before being delayed shortly after? Well, it's back with a new release date on Xbox Live Arcade, where it will launch on February 6.

The "Online Multiplayer + Wallace Pack" is priced at 160 Microsoft Points ($2), and as its name suggests, it includes a playable Wallace Wells along with the long-awaited ability to play with friends online. The date comes from Major Nelson's list of upcoming XBLA content, so things could still change, but at the moment it looks like we're finally getting the DLC.