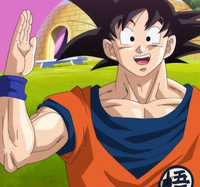 A 30 second TV spot has begun running on Japanese TV to preview the March 30th's Dragon Ball Z: Battle of Gods anime movie. While the majority of the footage used has been seen in previously trailers, it's an pretty effective bit of hype for the  throw down between Goku and God of Destruction Bills.

Currently known details on the plot, which takes place in the blank decade between the end of the battle with Majin Boo in chapter 517 of the manga and chapter 518 include:

Thirty nine years ago, when infant Goku was found in the woods by Grandpa Gohan, the Oracle Fish told Bills by its prophetic powers that a strong opponent would appear before him. Bills tracks down this warrior, Goku on Kaiō-sama's planet with his ally, the mysterious Whis. Bills challenges Goku. Ecstatic over the new challenge, Goku ignores Kaiō-sama's advice and battles Bills, but he is overwhelmed and defeated. Bills then leaves, but his eerie remark of "Is there nobody on Earth more worthy to destroy?" lingers on.

Seeking stronger warriors, Bills arrives on Earth. The heroes and their friends are at Capsule Corporation, where Bulma's birthday party is held. Bills faces and easily defeats them one after another - Kuririn, Super Saiyan Gohan, Piccolo, Vegeta, and others. Vegeta seems to have met Bills before.

How Video Games Tried to Recreate Anime OPs Before CDs