Plus two more irreverent takes on this season's psychic drama/comedy 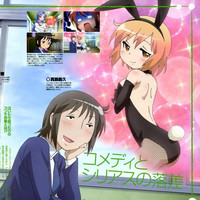 In a new video, over forty anonymous frequenters of the (in)famous 4chan's anime-dedicated /a/ image board performed a cover of this season's psychic comedy/drama Kotoura-san's opening theme "Sonna Koto Ura no Mata Urabanashi Desho."

The anime has caught on in Japan too. Some of its irreverent homages include...

Experience the Disastrous Life of a Teenage Psychic in "Kotoura-san"