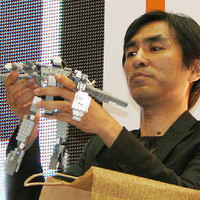 Macross co-creator Shoji Kawamori has a history of checking how his mecha designs work in three dimensions and transform using LEGO. If you picked up the Aquarion DVDs, you can see him break out a few models. Shinichirō Watanabe says he spent his time on Macross Plus fiddling with them. Now, to promote the Macross 30th anniversary game, he's given a new demonstration.

Other new Macross 30 promos without any LEGO