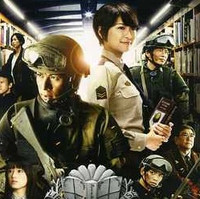 A teaser for the live-action Library Wars film debuted back in December, but now we have more than 30 seconds of footage to go on with the arrival of the full trailer. The adaptation of the light novel series by Hiro Arikawa and illustrator Sukumo Adabana is directed by Shinsuke Sato (Gantz films, The Princess Blade, Oblivion Island), and stars Junichi Okada (From Up on Poppy Hill, Hana), Nana Eikura (The Floating Castle), and Chiaki Kuriyama (Audition, Kill Bill).

Set in 2019, Library Wars depicts what happens after a newly implemented law brings the hammer down on printed material. Enter: The Library Force, a group created to protect the libraries and stop the armed forces from destroying these works. The film opens in Japan on April 27.