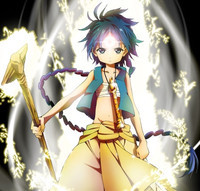 It's not been confirmed or listed for North America, but VIZ UK has scheduled an August release for Shinobu Ohtaka's original manga Magi: The Labyrinth of Magic - the source material for the currently running Arabian Nights inspired anime. Volumes two and three are slated for October and December respectively.

Other upcoming 2013 UK premieres include Tiger & Bunny from Mizuki Sakakibara starting in May, with volume one slated for a May release; Nobuhiro Watsuki's Rurouni Kenshi: Restoration, with volume one expected in June; and the official UK release of a number of Pokémon manga series.

Magi is published in Japan by Shogakukan, a part owner of Viz.