From Great Saiyaman to the giant ape transformation, lots of fan service on display 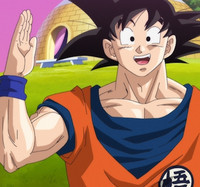 Wow, from Great Saiyaman to the giant ape transformation, there's a lot of fan service in the latest Dragon Ball Z - Battle of God preview, leading up to a big throw down with the feature's antagonist, God of Destruction Bills (voiced by Spike Spiegel's Kouichi Yamadera).

The film, set in the blank decade between the end of the battle with Majin Boo in chapter 517 of the manga and chapter 518, opens March 30th.