"Survival War!" OVA is a rather overt nod to one of Month Python's classic routines 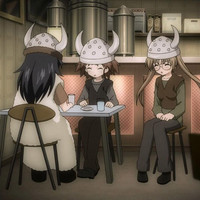 While reference humor is far from alien to anime, I certainly didn't expect a kind of Spanish Inquisition... I mean a Monty Python reference in Girls und Panzer. The second Blu-ray went on-sale in Japan on Friday, February 22nd. Included in the bonus 14-minute "Survival War!" OVA is a rather overt nod to one of Python's classic routines.