Possible figure reviewed before being launched into battle 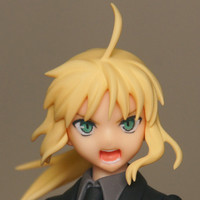 In what might be MoonshineAnimations' last stop motion production for a while due to an equipment mishap, the figma of Fate/zero's Saber is reviewed before the possible figure of Type-Moon's top heroine is put into battle against Black Rock Shooter's STRength.