Fan stitches together the panels from color chapter 25 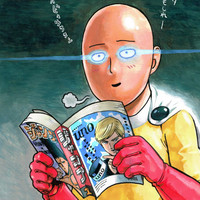 Manga/comics is a medium built around the idea that the mind will fill in what happens between image panels. This affords a lot of room for cheating logic, with even respected action manga illustrators not paying much attention to making sense of how bodies get from one image to the next. In contrast, Yusuke Murata's (Eyeshield 21) One-Punch Man makes a study of that space between images, maintaining consistency while cinematically spinning the "camera."

The attention that he plays to those transitions is impressively evident in a gif that a fan animated, stitching together the panels from chapter 25.