Series to arrive this year on BD, DVD, and digitally 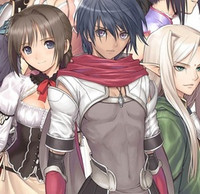 Sentai Filmworks' latest anime announcement is Shining Hearts, based on the Sega game of the same name. The 12-episode series is set to arrive on bilingual Blu-ray and DVD, as well as through select digital outlets, this year.

Shining Hearts: Shiawase no Pan is written and directed by Itsuro Kawasaki (Listen to Me, Girls. I Am Your Father!, Arc the Lad), with character designs from Keita Matsumoto (Bungaku Shoujo, Sands of Destruction), sound direction by tsuritama's Yukio Nagasaki, and music by Hiroki Kikuta (Secret of Mana, Koudelka).

Over the years, many strange things have washed up on the shores of Windaria, a mysterious island where humans, elves and other beings all live in harmony.  Rick, a former swordsman who runs the Le Couer Bakery with his three beautiful coworkers Neris, Amil and Airy, knows this all too well, having been found on the beach with a profound case of amnesia himself.  Perhaps that’s why Rick takes a quick interest in Kaguya, a girl who arrives in Windaria in a similar waterlogged and memory-less condition.  Whatever the reason, it soon becomes apparent that his skills with a sword may be required to protect the lovely piece of former flotsam.  For dark forces are on the move, the red moon is on the rise and a deathly wind is blowing into Windaria in the form of pirates, brigands and other strangers, all of whom seem to be seeking Kaguya!  Or is it the mysterious pendant that she wears that they’re after?  The one thing that’s sure is that there’ll be no time for loafing around the bakery now, because everything’s about to come out of the oven and go into the fire in SHINING HEARTS!