Series to arrive digitally soon, home video to follow in 2014 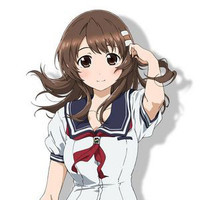 Sentai Filmworks shot out a press release earlier to announce the acquisition of Photo Kano, the 12-episode anime series directed by Akitoshi Yokoyama. The MADHOUSE-produced show will be available soon digitally, with a home video release to follow in 2014.

Photo Kano is based on Dingo and Enterbrain's PSP dating sim, which has also been adapted into a handful of manga series. Director Yokoyama (Marimo no Hana: Saikyō Butō-ha Shōgakusei Densetsu) also handles series composition, with character designs by Mae Shimada (key animation on Bleach and Gosick), sound direction by Kengo Kawazoe (Recorder and Randsell, Chitose Get You!!), and music by Kaleido Star's Mina Kubota.

During Kazuya Maeda’s first year of high school he felt like a nobody, just another forgotten face shuffling through the crowded hallways.  Even his best friend from childhood, Nimi, seemed somehow more difficult to approach, since she had matured a little quicker in the unsettling way that girls have a habit of doing.  However, this year, things will be different for Kazuya, and part of that change may just be because of the big new girl magnet hanging in front of him: the used digital SLR he just received from his dad!  But will just having a camera be enough to make talking to girls a snap?  Well, if he stays focused and has enough talent to make them look good, it might just be!  And since it’s digital, there are no negatives or having to wait for things to develop!  Will Kazyuya’s new stock in trade click with the most beautiful girls in school, or will his career as a lensman be just a flash in the pan?  Find out as he goes for total exposure in PHOTO KANO!