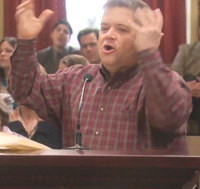 On one of this week's episodes of NBC's Parks and Recreation, Patton Oswalt takes the stand to deliver a whopper of a filibuster. However, his lengthy improvised bit—in which he pitches a version of Star Wars: Episode VII that mixes in the Marvel universe and more—isn't even in the episode.

Recognizing how incredible his nerdy, exasperated pitch is, NBC put the entire nine-minute speech online. See if you think J.J. Abrams should take Oswalt's advice below.

Actually, maybe Disney really will end up going down this insane path. According to a report on Coming Soon, Disney and Lucasfilm announced that, following Episode VII's premiere in the summer of 2015, they'll be aiming to release another Star Wars film every summer. Disney plans to alternate the numbered entries with standalone films.