Rumors Say Not to Expect "Sailor Moon" Anime This Summer 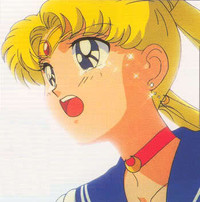 Last year's Sailor Moon anime anniversary event announced that a new anime was planned for summer 2013 with idol group Momoiro Clover Z providing the theme. That's about the extent of the hard information, and in that vacuum of details, there have been a lot of accumulating claims that we will not be seeing the revival next season.

OK, take this collection of claims for what it's worth.

Tōru Furuya, voice of Tuxedo Mask, was at the 20th anniversary event, but has not been confirmed to be reprising the role. He was also at this weekend's Festival Cartoonist in Nice, France, along with character designer Kazuko Tadano and animator Hiromi Matsushita. Reportedly, he said that the new anime will not be arriving this summer.

Similarly, chatter out of Europe, where the original anime was recently licensed for DVD, is that companies trying to work with Toei on the new license are being stonewalled on a work that will not be available in 2013.

Again, what's known about the series is that it was announced for summer 2013, with Momoiro Clover Z providing the theme. Healthy skepticism should be applied to everything else.