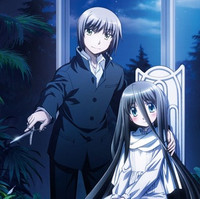 It's time for another Sentai Filmworks licensing announcement, and it's The Severing Crime Edge's turn in the spotlight. Sentai plans to make the series available digitally soon, with a home video release planned for later this year.

Sentai appropriately leads its press release off with the promise of "hair raising thrills, razor-edged suspense and shear insanity," because hair. There's plenty of the silky stuff in this 13-episode series from director Yuji Yamaguchi (Fate/stay night), who is joined by Katsuzo Hirata (Angel Beats!) on character designs and Tatsuhiko Urahata (Horizon in the Middle of Nowhere) on series composition.

Kiri Haimura loves cutting hair.  Actually, he doesn’t just love cutting hair, he obsesses over it and even has a special set of scissors he delights in using.  But when his mane obsession for a bit of trim draws him to Iwai Mushanokōji , whose long hair has never been cut, he finds himself entangled in a situation no shears can hack him out of.  Because Iwai is heir to a strange curse that makes her hair impossible to cut.  Or, at least, until Kiri’s clippers take off a lock, thereby revealing that his scissors are cursed as well!  But now that she’s shorn free, Iwai has a slew of “murderers” after her, each armed with their own cursed implements and eager for the chance to kill the “Hair Queen.”  And if that’s not enough to make Kiri wig out, it seems that many of them actually attend his own school!  Will this evil crew cut in on Kiri’s Hair Queen, or will he snip their ambitions in the bud?  The worst hair day ever turns into the ultimate series of close shaves, distressing situations and, yes, brushes with death in SEVERING CRIME EDGE!