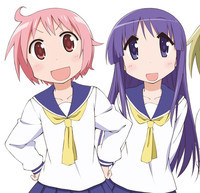 What's that, boy? Sentai Filmworks has another anime announcement? And this time it's Yuyushiki? Hot dog! Sorry, it's late and I'm running out of intros for these. Yuyushiki will be available soon through select digital outlets, with a home video release planned for later this year.

This 13-episode schoolgirl anime is directed by Kaori (episodes of Code:Breaker and the .hack//Quantum OVA), and features character designs by Yoshiyuki Tabata and series composition by Natsuko Takahashi (Moyashimon, Nura: Rise of the Yokai Clan).

The synopsis from Sentai's press release:

Everyone knows you can learn a lot on the internet, and some of it is even true.  But if you want to know what’s REALLY going on and important, then there’s just one place to go: the computer club!  Okay, so maybe it’s not the club itself, but the three girls you’re most likely to find there.  And maybe they do spend more time chatting about their social lives and debating things like the virtues of ketchup versus mayonnaise than they do learning about the ins and outs of a keyboard, but whatever they’re up to, it’s sure to put a smile on your face.  So come join serious Yui, hyperactive Yuzuko and lovable but not quite in touch with reality Yukari and learn what the mysterious YuiYukari Formula is all about in YUYUSHIKI!