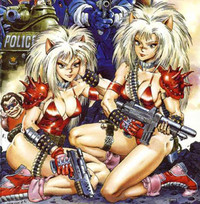 Maiden Japan has announced that their latest sci-fi anime rescue license is New Dominion Tank Police. The six episode adaptation of the manga by Ghost in the Shell creator Masamune Shirow will be available digitally and be distributed by Section 23 on bilingual English DVD.

When tanks are outlawed, only outlaws will have tanks.  Or at least, that’s what Mayor Weatherby of New Port seems to be forgetting in his efforts to ban certain forms of weapons, including those used by tank-driving policewoman Leona Ozaki and her partner Al.  Granted, the city’s Tank Police DO seem to cause a lot of collateral damage, but New Port’s a dangerous place.  Especially with the felonious and partially feline Puma sisters back on the prowl, and the Dai Nippon Geiken Corporation is building even more nefarious devices of evil intent that are finding their way into the hands of local terrorists.  Unfortunately for DNGC, they may be connected to the murder of Leona’s former partner, and once this hard-headed heroine sinks her treads into a case, there’s no backing up!  And as for the Pumas?  It’s going to be like cats and police dogs, but there are few problems that a little carefully applied mobile artillery can’t cure!  There’s no place to hide, from the good guys OR the bad guys, as law and order meets chaos theory in NEW DOMINION TANK POLICE!