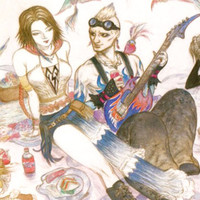 Taking its name for the islands studied by Charles Darwin, Galapagos syndrome is when something globally available  branches off to be developed for an isolated market. While some Japanese products have been criticized for it, others have decided to wear it as banner. The latter is the case for Compile Heart's Galapagos RPG project, proudly being made specifically for Japanese audiences.

The latest news is that Final Fantasy artist Yoshitaka Amano and Final Fantasy composer Nobuo Uematsu have been attached to the RPG being developed by the Neptunia team.