Action game is aiming for a worldwide release this summer 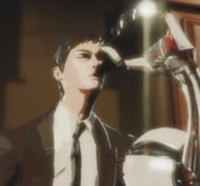 Killer is Dead's Mondo Zappa doesn't always ask for a lot when it comes to taking on assignments. Sometimes all he wants is a kiss, as evidenced in the beginning of the latest trailer for Suda51's upcoming action game. You'll also see more of the gigolo portions and a tiny bit of action in the English-subtitled clip below.

For more Killer is Dead, check out the video we posted yesterday, which hones in on the Gigolo Glasses. Killer is Dead is aiming for a worldwide summer release on Xbox 360 and PlayStation 3.

VIDEO: Latest "Killer is Dead" Promo Clip is as Strange as Ever