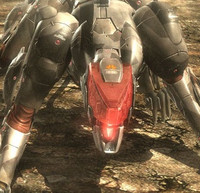 While we already learned the Japanese date a few days ago when Konami unloaded info along with a bunch of screens, we now know when to expect the Metal Gear Rising: Revengeance Blade Wolf DLC in North America. The playable robo-canine touches down with his own set of missions via PlayStation Network and Xbox Live Arcade on May 14.

Blade Wolf's DLC takes place prior to his run-in with Raiden, back when he was working under Mistral. A European XBLA release hits Europe on May 14, as well, with a PSN release arriving in that region on the following day. It'll cost ya $6.99/560 MS Points.

Reactivated by Desperado Enforcement's leader Sundowner and serving under Mistral, the DLC reveals LQ-84i's story prior to his battle and eventual partnership with Raiden, and his transformation into Blade Wolf. Players can battle countless enemies using an arsenal of weapons and abilities, culminating in an all-new boss battle.

Konami Wants Your Feedback on a "Metal Gear Rising" Sequel