Retails for nearly US$400 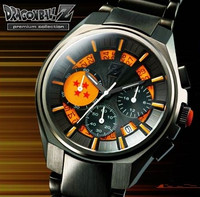 Jewelry and collectibles manufacturer Imperial Enterprises has released a watch based on anime series Dragon Ball Z. Timed to coincide with the release of the newest Dragon Ball Z film, Dragon Ball Z: Battle of Gods, the watch is an officially-licensed chronograph.

With story and character design led by Akira Toriyama, Dragon Ball’s creator, Dragon Ball Z: Battle of Gods has been seen by two million people in the four weeks since its theatrical release. The watch based on the film is designed in an elegant orange and black color scheme, and features a stainless steel body. The 60-second face is designed to resemble the Four-Star Dragon Ball from the anime, and the watch also displays 24-hour time, fractions of seconds, and a calendar, and has a stopwatch function. The watch is packaged in a box shaped like a Hoi-Poi Capsule and displaying the logo of the anime’s Capsule Corporation.

The reverse of the watch features the Dragon Ball Z logo and the watch’s serial number.

The watch is packaged in a box shaped like a Hoi-Poi Capsule and displaying the logo of the anime’s Capsule Corporation.