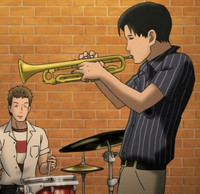 You may have heard some recent complaints—or even issued some of your own—regarding Sentai Filmworks' Blu-ray release of Shinichirō Watanabe's Kids on the Slope. To those affected by audio issues on the Japanese language track of episode 11, Sentai is listening, and released details regarding a replacement program.

A small number of users have reported experiencing a technical issue affecting sound quality.   The issue is isolated to the Japanese audio track of episode 11 (Blu-ray disc #2) on a small number of discs and is dependent on user equipment and sensitivity. The issue does not affect Sentai’s DVD release.

Sentai has established a customer service program to assist those customers who believe they received an affected disc.  Customers can click this link to participate.

In the meantime, Sentai Filmworks issued a recall for the Kids on the Slope Complete Collection Blu-ray. Anyone here run into the issue in question?

Tags
kids on the slope, anime, sentai filmworks
« Previous Post
Anime Promotion Finds a Home Under the Bridges of Tokushima
Next Post »
VIDEO: New "The Last of Us" Dev Diary Goes in Depth with The Infected
Other Top News
18 Comments
Sort by: