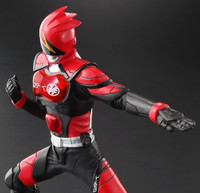 Season 2 of the show started broadcasting in April, and has gained widespread acclaim for its irreverent story and characters based on tropes of Akihabara nerd culture.

The figures are 105 mm tall with realistic sculpting and vivid color. Each is set into an energetic pose.