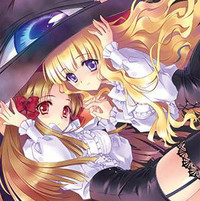 Media Blasters heard that you like yuri. So, they've licensed Yami to Boushi to Hon no Tabibito aka YamiBou.

The 2003 Studio Deen anime loosely adapts an adult visual novel published in December 2002 by Root. Unlike the game, which had a male player protagonist, the anime follows Hazuki Azuma, a tall, brooding high-school girl, as she searches for her adopted older sister and love interest, Hatsumi, in many different "book worlds".

They mention that they have no word yet on English dub plans.