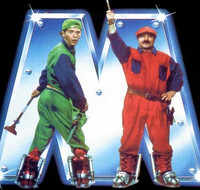 On May 28 it will have been 20 years since the debut of the notorious live-action Super Mario Bros. movie, starring Bob Hoskins as Mario and John Leguizamo as Luigi. To celebrate, a special midnight screening was held on Friday at the Nuart Theatre in Los Angeles, and one of the features was a special message from Leguizamo.

Whether you love the movie or hate it, it's nice to hear Leguizamo share both the good and bad memories of the film's creation. Dig into some of his behind the scenes anecdotes below.

May the fungus be among us, indeed.