Dub was set to be added once crowd-funding passed $50,000 mark 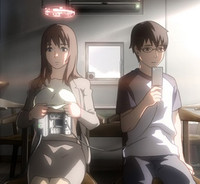 It didn't take the Time of Eve: The Movie international Blu-ray release Kickstarter long to reach its initial goal, so naturally it's time for stretch goals. Amazingly, the $50,000 stretch goal, which would add an English dub, was obliterated shortly after its introduction.

So yeah, Time of Eve: The Movie will be getting an English dub for the international Blu-ray release. The Kickstarter update says:

We envision this dub as a creative endeavor all its own. For us, it is an opportunity to make new discoveries about each character and the world they share through Time of EVE. And we know just the studio that can take us there. We will make an announcement shortly. We can't wait to share the news with you!!!!