North America gets the "Imperial Demo" on June 4 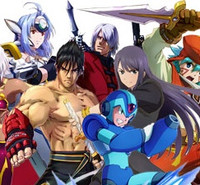 North American fans will get a chance to try out the Namco Bandai x Sega x Capcom strategy-RPG Project X Zone when a demo hits the Nintendo 3DS eShop on June 4.

According to what Namco Bandai told Siliconera, the North American "Imperial Demo" contains the same content as Europe's "Lethal Surprise" demo, which is set in the Imperial stage from Sakura Wars.