Adaptation of Level-5 RPG gets a start date 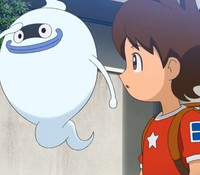 Youkai Watch is Level-5's next bet on a media-spanning franchise a la Inazuma Eleven, and the next stage of its domination of Japan has been scheduled, with the TV anime set to kick off in January, 2014.

The RPG which serves as the centerpiece of it all arrives on Nintendo 3DS in Japan on July 11, and a manga series launches in Shogakukan's Ciao shoujo magazine this December. The core of the story centers on a boy who wears a watch that allows him to see spirits, find out where they're hiding, and interact with them.

Some gameplay trailers for the 3DS game: