Capcom: "Deep Down" Has Nothing to Do with "Dragon's Dogma"

Medieval PS4 action is still "quite far off," should be at E3 next year 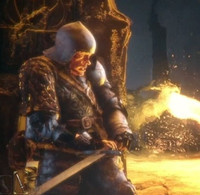 Remember the stunning Deep Down trailer Capcom used to show off its potential new title and Panta Rhei engine running on PlayStation 4? It was a doozy, and some took its title letters and medieval style to mean it could be a new Dragon's Dogma game. According to Capcom, however, that's not the case.

Capcom Corporate Office/Senior Vice-President Christian Svensson stepped in to a Capcom Unity thread to put rumors about Dragon's Dogma to bed: "For reference [Dead Rising 3] and Deep Down have nothing to do with Dragon's Dogma."

As for when we'll see more of Deep Down, according to Svensson, "It's still quite far off. Ono-san tweeted we'd have it at E3 next year."

We'll have to wait to see what the future holds for both Deep Down and Dragon's Dogma, which Capcom plans to turn into a major franchise. All I know is I'll be pretty blown away if whatever it ends up being looks anything like the footage shown during Sony's event.