New Miku 3DS game is slated for this fall 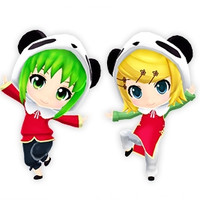 SEGA posted a new trailer for the upcoming Nintendo 3DS game Hatsune Miku: Project Mirai 2 today. The video features a Nendoroid version of GUMI and Kagamine Rin. The song used in the video is "Yi Er Fanclub" created by Mikito-P, originally released in August 2012. The original PV of the song has been viewed more than 2.2 million times on Nico Nico Douga so far. How do you like the Nendoroid GUMI and Rin?